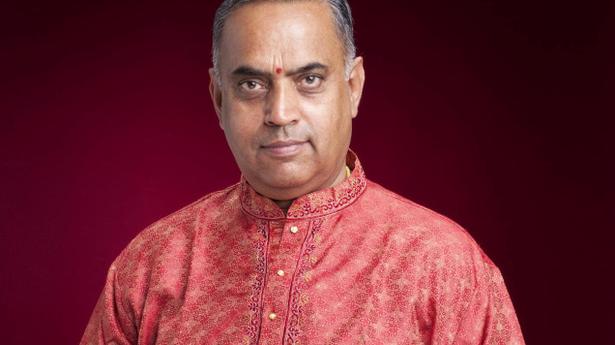 S. Shankar’s live performance was evocative and wealthy with emotion

The live performance started with a medium tempo rendition of the Kanada raga varna “Varanasyam Pranamamyaham” in adi thala, composed by Mysore Vasudevacharya. A lilting sketch of Bahudhari raga and the Thyagaraja krithi “Brova Bharama Raghurama” in adi thala adopted. A compact, but gamaka infused and weighty alapana of Bhairavi prefaced “Kamakshi”, Shyama Shastri’s magnificent swarajathi in mishra chapu thala. The composition, offered right here in a barely accelerated tempo with out detriment to its majestic gait and grandeur, was accentuated by vibrant percussion. The sahithya starting “Shyamakrishna Sahodari” was taken up for a brief neraval and kalpana swaras in two speeds. A hanging distinction was effected with a short however evocative and bhava-laden elaboration of Hamsanandi, suffixed with “Raghuvira Ranadhira” in rupaka thala, an beautiful piece composed by Y.Ok.Srikantayya.

The sweetness of Abheri was subsequent encapsulated in a succinct raga prelude and within the lovely rendition of Mysore Vasudevacharya’s “Bhajare Re Manasa Sri Raghu Veeram” set to adi thala. A swift “Anupama Gunambudhi” in Athana raga and khanda chapu thala led to the principle raga of the night, Simhendramadhyamam. The elaboration was of reasonable size, replete with tremendous touches and enticing phrases. Starting with mellow explorations of the mandra sthayi, the train ran the complete gamut of the dimensions, illumining its distinct and intrinsic attract. Swathi Thirunal’s “Rama Rama Gunaseema” in adi thala, sung in a energetic tempo, was ornamented with an lively, spontaneous and variegated neraval on the charana line starting “Muni Maanasa Dhaama”. The following kalpana swaras in two speeds included a spate of diminishing thala cycles touchdown on the panchama, incorporating numerous rhythmic mixtures, augmented by exemplary violin accompaniment, and knowledgeable percussion help that culminated in a reasonably elaborate thani avarthana.

The live performance concluded with Muthuswami Deekshithar’s “Rangapura Vihara” in Vrindavanasaranga and the ragamalika, Swathi Thirunal’s “Bhavayami Raghuramam” set to rupaka thala. Whereas the acoustics on the venue left a lot to be desired, leading to some muffled and muted passages, the efficiency was a real instance of the lead artiste’s melodious and full-throated fashion, different repertoire, technical talent and meticulous adherence to the core tenets of the idiom, and of the experience and expertise of the accompanists.